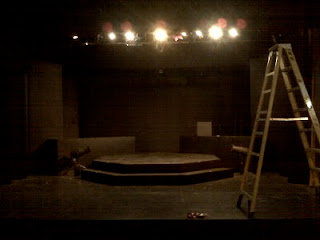 It's been busy with the start of the new school year but I look forward to catching one of these shows pretty soon.


The El Paso Playhouse will present the Beth Henley Drama Crime of the Heart September 3-25. Showtimes are Friday and Saturdays at 8pm and Sundays September 5,12, and 10 at 2pm. Call the playhouse at 532-1317 for ticket info. The play is directed by Ted Karber Jr. Click on the picture below to read the story done about the production by Doug Pullen of the El Paso Times.


The Romantic Comedy "A Man Having A Baby" by Martin R. Cardenas debuts this week at the Scottish Rite Temple Theatre. The theatre is located at 301 W. Missouri. Curtain goes up at 7pm on Sept 4 and 5. Tickets are $10 dollars at the door. The show is recommended for audiences 13 years of age and older. Read the story about the production by Doug Pullen here: A Man Having A Baby.

Shakespeare on-the-Rocks Festival
September 17-19 and September 24-26 at the YISD Fine Arts Amphitheater, 8455 Alameda.
Tickets: $10; $8 students and senior citizens. The plays will be part of the YISD Renaissance Fair which will take place in Sept 24-26.
For more info go to shakespeareontherocks.com

Posted by Coach Solis at 9:24 AM No comments: 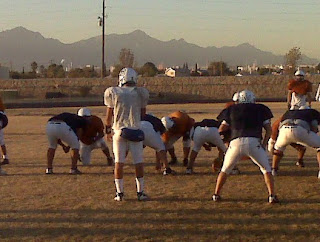 The El Paso High School football season kicks off this week with two varsity games on Thursday.
The El Paso Times will be posting scores and news on Friday night starting at 7pm. EP Gridiron will also be posting scores as they come in. The city of El Paso is loaded with talent and this should be the year where El Paso shows the rest of Texas that we can line up with the best of them. 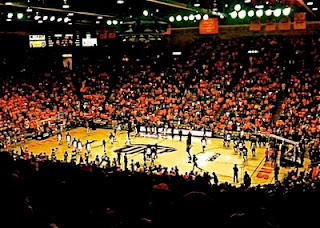 It was a wacky day on Thursday for UTEP basketball. Miner Rush (one of the best Miner blogs around) tweeted about the release of Senior point guard Myron Strong.

I watched Myron play in a few games last year and liked his intensity and his hustle. When the story first broke I was upset that another member of last years team will not be returning but understand why the decision was made. Check out the story in the El Paso Times for the details.

I saw an interview with Coach Tim Floyd on ABC 7 and he laughed at the reality that we only have one point guard on the team now. I guess when life gives you lemons....

Think this was a good decision on Floyd's part if Myron did violate the rules. Just tough to see a kid leave the program when he could have helped us in a tournament run next year. It's a bitter pill to swallow as a Miner basketball fan but sometimes the best thing a coach can do is to clean house.

On a positive note, former Utep player Derrick Caracter signed a contract to play with the Lakers. It was great watching Derrick play last season and I was impressed with the way he handled himself at his basketball camp earlier this summer. I hate the Lakers with a passion but will be following them just to see if D.C. can deliver. Posted by Coach Solis at 4:17 PM No comments:

Just saw the schedule for the free Movies in the Canyon series at McKelligon Canyon. The movies series is made possible through the efforts of the El Paso Convention and Performing Arts Centers. We have never been to movies in the Canyon but will be heading out this year to see favorites like The Express and The Goonies. Just another reason why we love living in El Paso. For more info call: 915-534-0665

Just saw the news on Boxing Scene website that El Pasoan Antonio Escalante stopped Edel Ruiz in the third round at the Don Haskins center Friday night. With the win Escalante improves to 24-2 with 15 ko's. According to the website, Escalante could face the winner of the Miguel Roman and Daniel Ponce De Leon fight next month. Hope that Escalante gets a title shot and brings home a championship belt to the Sun City. Article in the El Paso Times about the fight.
Posted by Coach Solis at 10:54 PM No comments:

Support and tools there for Mike Price to succeed at UTEP

Support and tools there for Mike Price to succeed at UTEP
Posted by Coach Solis at 12:23 PM No comments:

The El Paso Playhouse Presents "The Clown Who Ran Away" 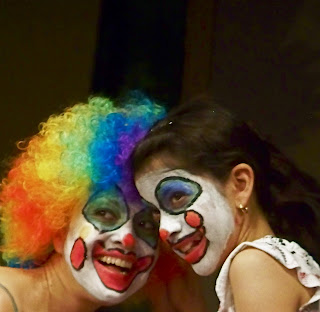 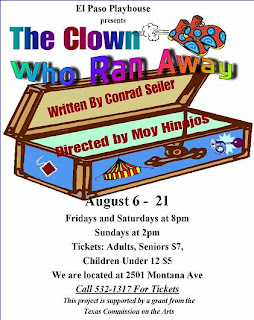 The El Paso Playhouse is putting the finishing touches on the upcoming production of The Clown who Ran Away. The show opens this weekend with a charity show on Thursday night.
The play is about a clown who runs away from the circus and meets many interesting characters on her journey. In this production you will see Mrs. Frumpkins and her doll-maker Annie along with their collection of special and talented dolls. Audience members will get to help the Sheriff and Ki Ki the clown get to the bottom of the kidnapping of the dolls by the evil villains Boo and Ugly. To top everything off the play even features a writing horse that would give Mr. Ed a run for his money in the brains department.


Stevo has been cast in the show as George, the boy with the yo-yo. My wife and I have been crossing our fingers that Stevo doesn't drive the director mad or knock anyone out with the yo-yo that he plays with on stage.

This is Stevo's first show and we are thankful that the people at the playhouse (cast, crew, and director) have been great in putting up with a nine-year old who thinks he is ready to audition for his own show on the Disney Channel. The director has the patience of a Saint.

Watching Stevo on stage is more nerve-wracking than watching him play sports. There are no time outs in live theatre, so dad is just gonna keep his fingers crossed and hope for the best. I am truly grateful to the Playhouse for giving young ones a chance to experience the arts up close and personal. I hope everyone comes out to support a great family show. 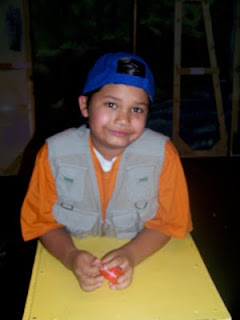 Show Info (thanks to Lynne Du Mond for the info) :
The Clown Who Ran Away directed by Moises Hinojos
El Paso Playhouse is located at 2501 Montana
Show runs August 6-21
Fridays and Saturdays at 8pm
Sundays at 2pm
call 532-1317 for tickets
Tickets: $5 students under 18
$7 adults

Stevo playing the part of George 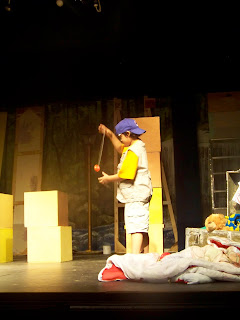 Stevo and his yo-yo 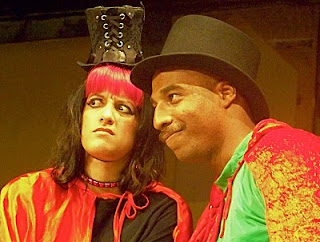 The villains Ugly and Rudolph Bernard Boo
Posted by Coach Solis at 9:51 PM No comments:

The league recently announced that it will not continue past this year so the Vaqueros have accepted an invitation to join the newly formed Pecos League. I think it was a small miracle that the Vaqueros lasted through an entire season and am glad that they have been invited back to play in another league. This year, the Continental Baseball League listed El Paso as the home site for the Desert Valley Mountain Lions and the Coastal Kingfish but trying to get information on ticket prices for home games or even a location where the games were played was more challenging than T.O. trying to find a team that would take him.

I really applaud the Vaqueros and the other teams for hanging tough through these tough economic times and hope that they find success in the Pecos League. A few things that I think would help the upcoming Pecos League broaden its fan base (especially among families):
1. Offer a free children ticket with purchase of an adult ticket.
2. Update websites frequently with game and ticket information.
3. Utilize social networking sites to promote home games.
4. Promotions, promotions, promotions. Meet the player day, autograph Tuesdays, Vaquero baseball camp.

The other local team, the El Paso Diablos, need a miracle to dig itself out of the cellar in the American Association. The Diablos have lost three straight as of August 1, and are sitting at 7-16 in the Southern Division. 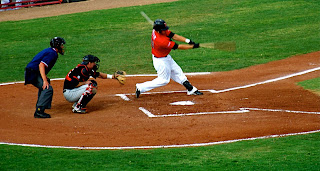 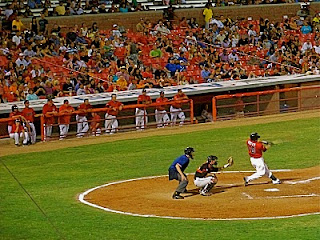 In the El Paso Times, fans can cut out a coupon for any game this week that will get them a free admission with a paid admission. The promotions this coming week include: Thirsty Thursdays, Where's Waldo Wednesday, Bud Lite Lime Tuesdays, and Autograph giveaway Mondays. Talk of the Diablos getting the team from Portland has heated up in the past few weeks but the probability that we will land them doesn't seem to promising. Affiliated baseball would be great for the city but with the economy being what it is I don't see the city putting up big money to renovate the stadium in hopes of luring the Portland team. 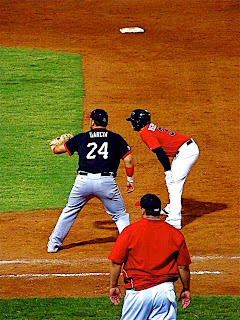 We hope to catch a few more games this year before the summer finally escapes us. Let's just hope the Diablos have at least one more run in them to make the last part of the season interesting. 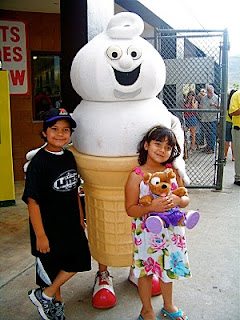 Jazzy and Stevo at a recent Diablo Game
Posted by Coach Solis at 9:55 PM No comments: 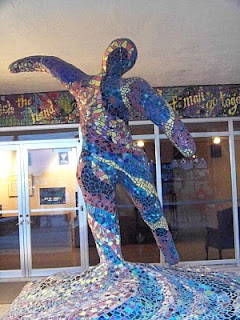 Spent Saturday at the Ysleta ISD fine arts festival with the kids and was impressed with the activities and the overall turnout for the event. The festival included a production of Viva Los Ninos and showcased the artistic talents of many of the students enrolled in the district's summer arts program. Stevo and Jazz had a blast on all the inflatable jumping balloons and Jess and I enjoyed how organized everything was. 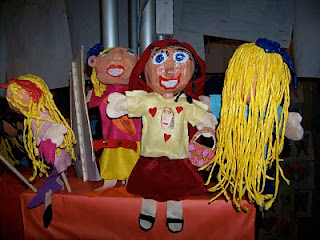 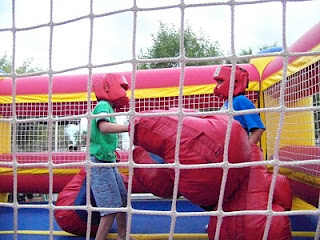 Stevo channeling his inner Mike Tyson in the inflatable ring 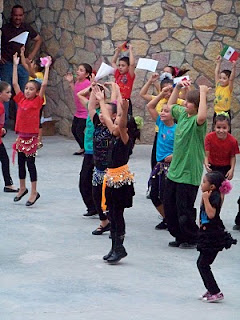 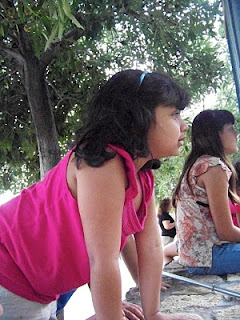 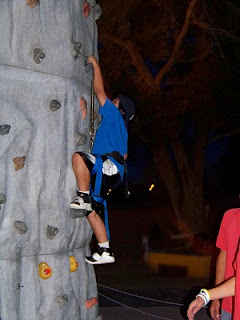 Living On The Border- Life in El Paso, Texas

Promote Your Page Too